Upon logging into Guild Wars 2, you’ll receive an email from Magister Tassi of the Durmand Priory. She’s in urgent need of assistance in containing a mysterious, sinister artifact she found in the ruins of the Nolani Academy. The Show Me button in your mail will point to the new Haunted Nolani Waypoint in the Black Citadel.
Once you arrive outside the ruins, head north to talk with Venna Castblade, who’ll update you on the current situation. If you ask her to let you in, you can pass through to the other side of the gate where you can enter the story instance “The Reliquary.”
01-BaM-walkthrough
The Reliquary 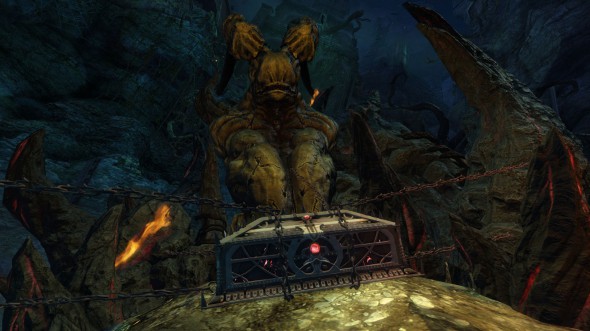 Once inside the Nolani Academy Ruins, read the note on the ground from Tassi and proceed down into the crypt where Tassi has set up her research station. Wind your way through the crumbling passageways to find Tassi with the reliquary.
Speak with Tassi to learn about her discovery and prepare yourself for the opening of the reliquary. Tassi’s expecting to find the Mad King Thorn closed up in that box, but she’s in for a surprise—someone else is breaking through the barrier between realms! You’ll have to be quick on your toes to help Tassi frustrate this new attacker and send them to the Mad Realm.
After you leave the instance, Tassi will send you mail with her relay golem and some consumable Halloween finishers. You’ll need to complete the meta achievement, A Sweet Friend, to progress the story. Using the relay golem occasionally will update you on Tassi’s progress.
Halloween-themed daily achievements also count toward the completion of A Sweet Friend.
02-BaM-walkthrough
Open World

In Queensdale, Kessex Hills, and Gendarran Fields, Haunted Doors will appear in two varieties: green Mad King doors and red Bloody Prince doors. Each can treat players with a Trick-or-Treat Bag or trick you with the Mad King’s army of Candy Corn Elementals, Plastic Spiders, and Gargoyles or the Bloody Prince’s army of undead.
Completing door events will progress the Shut the Doors achievement.
Lion’s Arch is decorated for Halloween once again! There are pumpkins to carve, trick-or-treating kids, and the Mystic Forge cauldron to jump into. Vendors sell Halloween-related recipes and Sonders the Merchant in Fort Marriner will sell you special goods for your Halloween candies and trophies.
The Mad King himself will visit Lion’s Arch on Halloween (9AM October 30 to 9AM November 1 PDT). Successfully playing his Mad King Says game will give you the A Royal Tradition achievement, which counts toward A Sweet Friend as well. You’ll find him either in the Grand Piazza or the Mystic Plaza.
Just outside the home cities, players will find a Halloween tent with a Mad King actor, more costumed kids, and Rasmus the ghost, who can transport you to the Lunatic Inquisition.
The Heart of the Mists and Borderlands citadels in World vs. World have been decorated for Halloween.
03-BaM-walkthrough
Mad Realm

Entering the Mad Realm through the Haunted Doors will bring you floating isle above the Mad King’s Labyrinth. Talk to the nearby Lunatic Boatmaster to go to the Lunatic Inquisition or the Mad King’s Clock Tower. You can use the portal on the ground to enter the labyrinth below or exit back to Tyria through the Haunted Doors.
The Lunatic Inquisition is a PvP activity in which your goal is to survive the night. Lunatic Courtiers chase Villagers and convert them, while Villagers run, hide, and fend off starvation.
Those who seek a challenging jumping puzzle can attempt to ascend The Mad King’s Clock Tower. This is a timed jumping puzzle that challenges you to race your way to the top of the clock tower. There are progress reward chests along your way and a final reward chest inside the clock tower belfry.
The Mad King faces off with the Bloody Prince in the labyrinth where their forces clash. Players can fight their armies, mine Candy Corn, and carve pumpkins. The real challenges are the three legendary bosses that live in the maze: The Skeletal Lich, the Grand High Viscount of Candy Corn, and the Labyrinthine Horror.
04-BaM-walkthrough
Second Story Instance

Once you have completed the A Sweet Friend meta achievement, you’ll be rewarded with a Mini Candy-Corn Elemental. This living candy corn is exactly what Tassi needs to complete her plan! Return to the Nolani Academy Ruins in the Black Citadel to finish out the story arc. This is a repeatable multiplayer instance which requires at least one player to have finished the meta achievement. Get ready to glaze!
New Items and Rewards 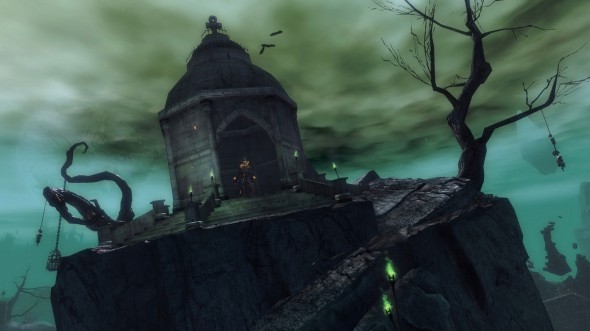 Finishing A Sweet Friend will earn you a Mini Candy-Corn Elemental.
Playing a game of Mad King Says doesn’t just give you a chance to laugh at the lunatic monarch’s jokes—if you successfully complete a match, you’ll win yourself a Mask of the Night!
The rewards for the Mad King’s Clock Tower jumping puzzle have changed. Upon finishing the jumping puzzle for the first time this year, you’ll receive a single-use, account-bound Mad King Chest which will allow you to choose between light, medium, or heavy hand armor. The Armwraps, Gloves, or Gauntlets of Madness that you receive on picking will be soulbound on use. When you first double-click on your new hand armor, you’ll be able to pick which stat combination to use. After that point, the hand armor will be soulbound to the character that used it and you will not be able to re-assign a stat combination. Subsequent completions of the jumping puzzle will award Trick-or-Treat Bags.
Sonder the Seller in Fort Marriner will exchange your stacks of Pieces of Candy Corn, Chattering Skulls, Nougat Centers and Plastic Fangs for refined versions of each. Candy Corn Cobs can be used to purchase the Mini Bloody Prince Thorn and 20-slot Halloween Pail bag. Gibbering Skulls, Tyria’s Best Nougat and High-Quality Plastic Fangs are used in Mystic Forge combinations to create recipes for exquisite Halloween weapons.
05-BaM-walkthrough
New Achievements